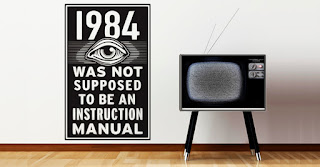 I normally don't post articles that emphasize the sensational especially if the post is about something that could only possibly happen. But this article, and the links that follow, I believe are a sign of the times we live in, of the increasingly desperate attempts by our capitalist overlords to hang on to their power and wealth and to the system that delivers these drugs to them.

Of course our capitalist overlords literally didn't introduce this bill in Congress, but this is how they function: through their paid-for members of Congress to preserve the myth that our government functions as some kind of democracy. I simply can't believe that Congressmen Adam Kinzinger and Ted Lieu did this on their own initiative. I can't prove it, but more likely they introduced this draconian bill on the orders of people who serve as well-paid agents of the capitalist ruling class.

You might also be interested in reading an article from Mint Press about how the new right-wing government in Argentina has banned RT and TeleSur in their country.

The misuse of media and the censorship of media is reported on by two journalists that observed events in Libya and Syria in a translated article entitled "The manipulative role of the western press in regime change".

The management of independent media is on display at the Bilderberg meeting in Dresden, Germany in this 7:06m video report by Luke Rudkowski of WeAreChange.

When our masters in the capitalist ruling class can no longer manage us by managing the information we receive, then you can be certain that they will reveal their hidden fist of fascism by using the police, military, and vast prison complex to keep us obedient to their directives.
at 6/11/2016 09:31:00 AM

Some websites I recommend: